We have always been great fans of Apple Technology ever since the Apple iPod. This continued with the iPhone and iPad devices. When we went to the store to buy the Apple Airtag for review, the Apple Airtags were nowhere to be seen. We had to ask the shop assistant where they were, and he found one behind the counter. Ironically they were  probably stored behind the counter to prevent them being stolen, as they come in a tiny box.

The Apple Airtag cost $55 in New Zealand, which was quite pricey. But the Airtag should be worth every cent if it saves us time and frustration, should we lose our Wallet or Keys in the future. Plus because the battery is user replaceable, it means that it should last many years. Some of the old previous trackers that other manufacturers released did no have a replaceable battery, so it meant having to buy an entire new tracking device every year or so.

The 'Find My' app potentially allows you to view on a map,  where your lost Apple Airtag is. If you have a newer Apple iPhone, such as the iPhone 11 or 12, the iPhone can lead you to the precise location, also showing the direction and distance it is in in real-time, as you search for it. Older iPhones will only show the general location of the Apple Airtag on the map. You then have to locate the tracker by activating the  'sound alert', to pinpoint it's location. This is not ideal if it is in a noisy environment.

The Apple Airtag does have a built in speaker that will ping a sound when you press the 'Play Sound' button in the 'Find My' app. This is very useful if you have lost your Apple Airtag somewhere around the house. You can just walk around the house listening for the beeping until you find it. If there were some criticisms about the Apple Airtag, these would be that it only plays the sound for a few seconds, and it isn't very loud. So you have to keep pressing the 'sound alert' button to keep it beeping. Whereas the other devices we have used, they would play the sound for a lot longer, and were a bit louder.

If you have an older iPhone, you don't get the precision Finding feature in the app, so you must rely on this beeping to find the Airtag.

One thing we did notice is that if you pick up the Apple Airtag after it has been stationary for a period of time, it starts to beep. We couldn't work out if this was a fault or not. But apparently it is a new feature to prevent the Apple Airtag being used to secretly track people.

The Apple Airtag has so far worked well, and it seems to be reliable device. It is also a very nicely designed product, small and lightweight, and easily fits into a wallet.   It would make a great gift. It is especially good for older people who regularly lose their wallets or keys. Apple Airtags can be purchased separately, or in packs of four. Buy Apple Airtags Now

We are a participant in the Amazon Services LLC Associates Program, an affiliate advertising program designed to provide a means for youtubers to earn advertising fees by advertising and linking to amazon.com. Any purchases you make from Amazon are between yourself and Amazon. 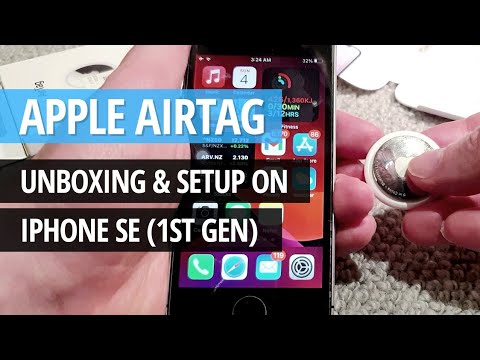